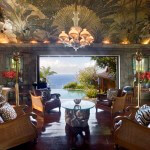 Mandalay was built by the Swedish architect Arne Hasselqvist between 1986 and 1989 and was built for David Bowie who on a trip to Mustique stumbled across the site and was instantly enamored.

David wanted a build a Balinese-style house, or as he put it a ‘folly of follies’, and Swedish architect Arne Hasselqvist, known as ‘The Man Who Built Mustique’ worked with a team of architects, landscape experts and interior designers to achieve this.  Robert Litwiller led the overall design coordination, including the logistical challenge of shipping significant amounts of materials from Indonesia, America and Europe.  Michael White was the tropical landscape gardener who oversaw the planting and landscaping of the grounds. And Linda Garland was the interior designer who sourced the many Balinese artefacts for the house.

The home was completed in 1989, with David moving in to the property in the December and naming the property ‘Britannia Bay House’.  After moving in he built a small recording studio in the grounds, which is now a self-contained bedroom suite.

David often spoke about his love for the property and told Architectural Digest that he wished he could spend his entire year there.

In 1994 David sold the property to poet and author Felix Dennis who said that once he entered the estate it had him “under its spell” and he knew there was “no turning back”.  Felix decided that for him the name ‘Britannia Bay’ wasn’t quite right, instead deciding on Mandalay after the Rudyard Kipling poem, ‘The Road to Mandalay.’

Over the next ten years, Felix carried out various refurbishment projects at the estate, enhancing the offering and size of the property without compromising on the incredible original design.   One of the biggest refurbishment projects was to the roof of Mandalay which involved creating a new roof for the entire property.  After months of work, the new Balinese-shingled, wing gabled roof was complete.  The hand carved and painted gable ends had taken over nine months to make and this meticulous attention to detail ensured that the roof would become the crowning glory of Mandalay, alongside bringing to life the very final part of Arne Hasselqvist’s original vision for the property.

Throughout the property are many unique artefacts and sculptures which have been curated by the estate’s owners.  The entrance pavilion provides an impressive welcome to many guests.  Filled with an incredible selection of Balinese festival masks which look down from the rafters, and are accompanied by fire-breathing griffins designed by sculptor David Annand, Mandalay offers a welcome like no other.  The loggia, with intricate Balinese carvings was rescued from an Indonesian temple by David Bowie’s architectural team in the late 1980’s, and this stunning corridor to the main rooms is a striking, original feature of the property.  Moving to the outside of the property, the ‘floating’ dining pavilion is guarded by two giant stainless steel bird sculptures by Rachel Higgins and the central marble dining table, which was shipped from Bali, is lit by hand painted glass lamps created by Ulla Darni.  These are just a small selection of the treasures that can be found in Mandalay, with every room offering a new surprise.

In 2014, Mandalay was sold again, this time to British Entrepreneur Simon Dolan who shares the same passion and enthusiasm for the estate as its previous owners.

As it says at the entrance to Mandalay ‘Selamat datang!’ – ‘Welcome to our house!’