Bowie came across the plot where Mandalay now sits almost by accident when on a trip to visit Mick Jagger. He had planned to go on a tour of some Caribbean islands but the boat was unable to make the trip; leaving David Bowie stranded. It was then that he spotted the empty land which a few years later would house his magnificent Mandalay Estate.

David Bowie once said that he wanted the house to be as ‘unlike the Caribbean as possible’; which lead Arne Hasselqvist to include a series of Japanese and Scandinavian styled features throughout the property. This ensured that the house is completely unique and has a whimsical feel. To this day, Mandalay Estate still looks as David Bowie intended it to, with the biggest change being its name. In a 1992 issue of Architectural Digest, David Bowie said of Mandalay Estate “It’s a whim personified. I love a good cliché, and this house for me is just the most delightful cliché”.

Aside from his hugely successful music career, David Bowie also had a thriving acting career. He studied avant-garde theatre and mime before building up an impressive portfolio of stage and film features; notably he performed as Joseph Merrick in the Broadway Production of The Elephant Man, in Jim Henson’s The Labyrinth as The Goblin King and portrayed Andy Warhol in Basquiat.

Full details of David Bowie’s film and music career can be found on his IMDB page and on Wikipedia.

A music icon and innovator, David Robert Jones was born in January 1947 and passed away in January 2016 – just a few days before his 69th birthday.

David Bowie married his first wife, Mary Angela Barnett in 1970 and they have one son together; Duncan Jones who is now a successful director. Angela and David divorced in 1980. In 1992, David Bowie married model Iman. Iman and David’s daughter Alexandria was born in August 2000. David’s first grandson was born in July 2016, just six months after his passing.

“I don’t know where I’m going from here, but I promise it won’t be boring.” 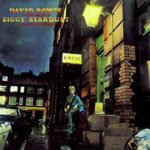 Known professionally as David Bowie, his career spans over five decades. Rising in popularity throughout the sixties, seventies and beyond his style and music still influences musicians today. His distinctive style in both music and visual presentation is what made Bowie stand out from the rest. It is estimated that during his career, he sold a huge 140 million records worldwide, making him one of the best selling artists in the world. He received numerous awards and certifications for his record sales and contribution to music. David Bowie was also inducted into the Rock and Roll Hall of Fame in 1996.

For David Bowie fans, nothing could be better than spending a week or two in his tropical hideaway on the island of Mustique. For more information on how to make a booking please visit our contact us page. The current owner of Mandalay Estate is Simon Dolan.